You are here:
South East AsiaTravelVietnam 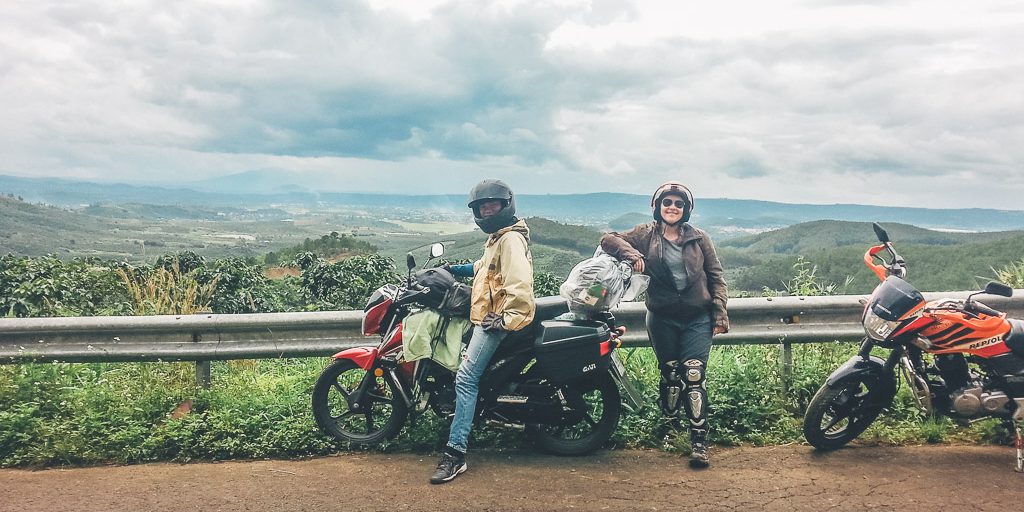 Our 100 days of travel through South East Asia began in Vietnam with a motorcycle tour from the South to the middle of the country, riding through the central highlands en route to Hoi An.

Here we are, at the beginning of our first overseas trip together. We had been married for 2 and a half months, had quit our jobs, put our stuff into storage, and were trusting in our ability to spend 100 days straight in each other’s pockets without bloodshed.

Thankfully, we survived the flight over and (eventually) found our hostel in the back alleys of Ho Chi Minh City. We awoke well rested and enjoyed our first bowl of Pho (breakfast of champions) on a street corner before spending the rest of the day wandering around HCMC. After a few hours we decided to relax with one of the local brews. Delicious.

Ho Chi Minh City was a great introduction to Vietnam, and a good jumping off point to plan our next steps. We had a great last night, enjoying the hustle and bustle of the Nguyen Hue Walking Street, crowd-watching from a rooftop bar, and learning very quickly to ask the price of anything before ordering it after being slapped with an $8 bill for a bottle of water at the Sax n Art Club.

Before we knew it we were leaving Ho Chi Minh City behind and squeezing into our bunks on our first sleeper bus, heading to Da Lat.

Da Lat is known as ‘Little Paris’, and is a popular tourist destination in Vietnam due to its temperate climate and physical beauty. The pine forests, lake, and cooler temperatures made it one of Imogen’s favourite towns.

Once we had arrived we organised a 5 day motorbike tour to take us through the Central Highlands and end in Hoi An. While our guide, Thien, organised our gear we spent the day visiting the ‘Crazy House’.

Officially called the ‘Hang Nga Guesthouse’, this house has been envisioned by a local architect to entwine the natural and built environments. As you wander over, under, and around the house, you feel like you’ve stumbled in to a strange mix of fairytales, including Jack and the Beanstalk, Alice in Wonderland, and Hansel and Gretel.

We then visited the nearby monastery, accessed via cable car over the pine forests. It was lovely on the way over, and the monastery and nearby lake were great to explore.

As the afternoon started to come to a close, the rain worsened and we were stranded for about an hour before they reopened the cable car. It was a bit of a stressful ride home with heavy rain and winds buffeting the carriage! We made it safely back in to town and had an awesome dinner at the Da Lat night markets, trying different BBQ meats and warm soy-milk drinks.

We really enjoyed our time in Da Lat and were looking forward to starting our tour the next day to explore more of the region.

The next morning we were collected by Thien to start our tour. After a quick lesson in motorbike communication signals for Will, and a few attempts at climbing on the back of the motorbike while swinging her leg high enough to clear the mountain of luggage for Imogen, we were off!

That day we visited a nearby flower farm, a coffee farm, the Elephant Waterfalls, and marvelled at the natural beauty as the hills of Vietnam opened up before us. We stopped to spend the night at Lak Lake.

We only had a short way to travel the next day so we were able to spend about an hour on the lake with a local man in his traditional dug-out canoe. It was very peaceful on the lake, and we saw some people having elephant rides.

After our paddle, we went with the man to see his traditional ‘long house’ home. He also spoke to us about his involvement in the Vietnamese army during Pol Pot’s regime.

That afternoon we rode through Buon Ma Thuot and finished the day at the Dray Sap waterfalls, spending a drizzly night in the rainforest accommodation. There was a small zoo on site and although we were a bit torn about supporting the captivity of animals, we decided to check it out as the entry was included in our accommodation fees.

Inside there were lions, a variety of monkeys, and small cat species. One of the staff members was hand-rearing two leopard cubs and she allowed us to come in and see them. It was amazing being so close to them and being able to pat them, but we were glad we still had our motorbike shin pads on as they were quite playful with our legs. After that she took us to see the adult tigers she had previously raised and Imogen was able to quickly sneak a hand through the cage bars to pat one.

This was our longest travel day yet, covering 250 kilometres from Dray Sap Waterfall to Kon Tum. Thien showed us a ruined church that had been the site of a battle, and we visited the beautiful T’nung lake near Pleiku.

We were really starting to get in to the centre of Vietnam now, and seeing pasty white skin was still a bit of a novelty for some of the locals. Everywhere we went people were wanting to get photos with Imogen and at dinner that night we had a good time speaking with some local children.

It was a bit funny when the young boy got ‘I like you’ and ‘I love you’ mixed up when speaking with Imogen.

The restaurant we were eating at was a BBQ place that specialised in Birthdays, so every few minutes they would bring out a cake with a giant sparkler on it and play a funky Vietnamese version of ‘Happy Birthday’.

On our last full day of the motorbike tour we travelled from Kon Tum to Kham Duc, going via Ngoc Hoi, a town that was very close to the triple border with Cambodia and Laos. Ngoc Hoi also marked the official beginning of the Ho Chi Minh Road.

We stopped at a tapioca processing plant, which was very high tech. The operation began with ladies selecting the cassava roots and chopping them in to smaller pieces with their machetes. This was all done on the floor. The root was gradually broken down through boiling and filtering until a fine white powder remained. It was pretty interesting to watch.

Throughout the tour, Thien had been teaching us about the Vietnam war. Everywhere we went there were reminders of how big an impact the war had on the development and identity of Vietnam.

We visited many memorials and stopped in at this abandoned US airstrip just past the town of Dak To.

After this he directed us to a rickety suspension bridge where we tested our courage and walked across. Once on the other side we were embarrassed to watch a local zip across on his motorbike with none of the trepidation we had just felt.

That afternoon we continued through the mountains to Kham Duc. This is an example of one of the roadside shops we would stop at during the day for a cup of coffee and a bit of a rest.
Imogen was kept entertained by the resident animals while Will photographed the local life and Thien slept. We would also need to stop every hour or so to jump off the bike and wake our butts up!
Luckily the countryside was so beautiful, there was always plenty to look at while we were stopped. Unfortunately as we travelled on the Ho Chi Minh Road, there were also great scars across the landscape where the US had used defoliants indiscriminately. We had seen photographs of the physical effects of these chemicals in the War Remnants Museum in Ho Chi Minh City and it was horrifying.
We pulled up to spend our final night of the tour in Kham Duc. This was quite a small town, but we enjoyed spending an hour or two walking around, as it was obviously a town that was simply for the Vietnamese people, and had not been tarted up for tourists. There were mountains on all sides and it was a very nice sunset. The walk home was enlivened by Imogen trying to befriend a pack of not very friendly stray dogs, and us needing to walk very quickly away from them and their jaws.
Our final day of the tour, we rode from Kham Duc to Hoi An. We were following the Ho Chi Minh Road, and as we were coming down off the highlands the road was quite spectacular, with lots of curves around the mountains. It made for a fun day of riding!
This part of Vietnam was visually awesome, with large tracts of dense jungle all around us.
With Thien teaching us about the original Ho Chi Minh Trail, and showing us an unaltered section which had some Vietcong trucks on display, it was easy to visualise the effort and engineering that the North Vietnamese Army had invested in this key piece of military infrastructure.
We stopped at a pineapple farm on the way down and had a couple of deliciously fresh pineapples to fortify us for the final leg of the tour. We arrived in Hoi An that afternoon and said our goodbyes to Thien. The motorbike tour was a real highlight of the whole trip, and we definitely plan to visit the Central Highlands again.